WHAT WE DO WITH YOUR DONATIONS?

We understand you might be hesitant to give donations for rhinos without fully knowing how we spend the funds — especially since many wildlife charities tend only to use a fraction of the money raised for the intended purpose:  to protect vulnerable species.

At Rockwood, we assure you that 100% of donations go directly towards rhino conservation. Your money helps us protect and care for our 300+ Southern white rhinos, 24 hours a day.

We spare no expense in protecting our rhinos and 25 vigilant rangers, but costs are always rising.

Donations go towards maintaining our state-of-the-art security system, keeping our rangers kitted out and on their horses, and ensuring our gentle giants are healthy, happy and well-fed.

We are also involved in groundbreaking rhino DNA research to ensure the survival of the species.

Helping Our Rhinos Have More Babies

Repopulation is key to saving the Southern white rhino.
Since our establishment, we’ve celebrated the birth of 160 calves. Our annual repopulation rate is double what is in the wild – making us one of the world’s largest private rhino conservation projects.
Donations go towards keeping our newborns safe, as well as hand-rearing orphaned calves who need the same amount of love as human babies.

DONATIONS TO ROCKWOOD
HELP COVER
SOME OF THE BIGGER EXPENSES:

Rockwood is situated between the Great Karoo and Kalahari Deserts. As you can imagine, it’s an arid, semi-desert most of the year. The area may seem inhospitable, but it’s hard to deny it’s unspoiled beauty.

The location’s remoteness works in favour in terms of safety and security. But with over 300 rhinos and all the other wildlife under Rockwood’s care, we have to truck feed in during the scarcer months. Tons of feed is brought in to maintain our wildlife population.

In recent years, this has become even more crucial with devastating droughts and prolonged dry seasons leaving insufficient natural grazing.

Our multi-camp system means that the rhinos are surrounded by over a hundred miles of electric fencing. There are also ranger towers, outposts, horseback patrols, drones and infra-red security cameras to monitor and protect our rhinos 24/7. All of which requires maintenance that is made more costly due to our remoteness.

Our secluded location also means vets have to be flown in by chopper for routine health checks on rhinos or if there is ever an emergency. A vet is also on-site whenever research scientists and their students visit to gather samples and stats on the rhino’s health.

Performing health checks and collecting research samples takes a huge team to pull off successfully. Rhinos can weigh up to two tons, so for their safety and ours, they’re sedated using specialized darting kits. The drugs and actual dart kit are one of our biggest expenses.

In South Africa, it’s legally required that every rhino must be DNA profiled. This is for a number of reasons, the most important being that if a rhino is ever poached, DNA can be used to track where the horn came from and can help build a criminal case against poachers and the illegal black market dealers.

DNA is also useful in ensuring the genetic diversity of the entire population. Back in the 1970s rhinos were all but wiped out, but we managed to bring them back from only a few hundred animals. It was a major triumph for conservationists, but still has the possibility of a genetic bottleneck. Reduced genetic diversity leaves any species vulnerable to disease, inbreeding and ultimately, extinction.

Despite rhinos being an iconic species, not much is known about these mega-fauna. Rockwood works closely with universities and research scientists from all over the world to expand our knowledge of wildlife, and rhinos specifically.

Rhinos have no natural predators. They’re considered an umbrella species because so many other animals in their habitat rely on their presence. Rhinos only graze on certain types of grass, making room for other types of plant life which other herbivores like zebra and antelope rely on. The smaller herbivores are prey so indirectly, predators rely on a herbivore they can never hunt for their next meal.

Even smaller predators like the black-footed wild cat, one of the smallest African cats, that hunt insects, rodents, birds and reptiles rely on the rhino. Without these animals to keep the grass in check, it would overgrow and hamper the ferocious felines hunting, making it impossible to survive.

Without research, we would never know these two completely different species are so intimately linked.

We’re in the process of putting up learning centres where visitors can share in the experience of saving the rhino and walk away with more than just a good feeling.

At Rockwood, we believe that the more we know, and the more people that know about rhino the better we can protect them, the species and environment that rely on them. 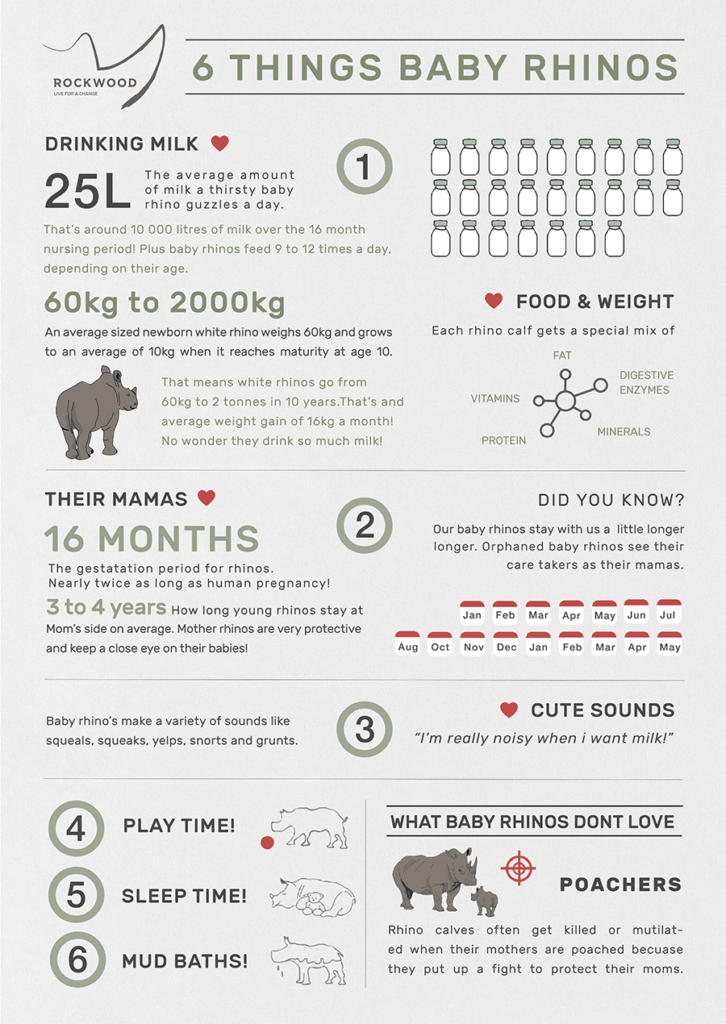 BE PART OF THE CHANGE

Aside from online donations, there are other ways you can make a difference, including becoming a conservation volunteer or choosing to conduct your wildlife research at Rockwood. Whether you give time or money, your contribution — however small — makes a big difference.

YOU, OUR VISITORS, PARTNERS & SPONSORS MAKE OUR CONSERVATION EFFORTS POSSIBLE.