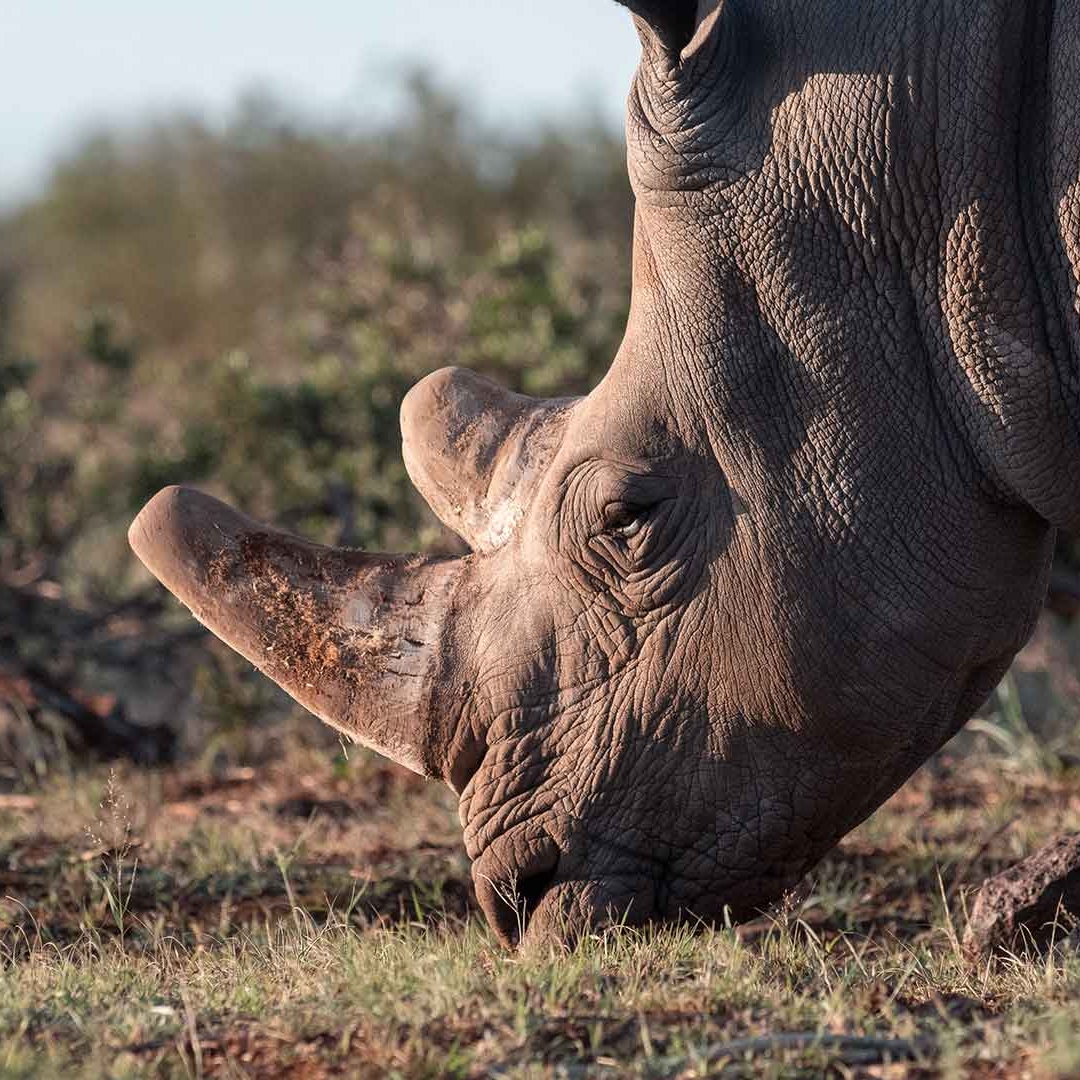 THE RHINO DIET – A CLOSER LOOK AT THE 5 REMAINING SPECIES

With their massive bodies, thick, folded skins and facial horns, the rhinoceros (“rhinos” meaning “nose” and “keras” meaning “horn of an animal” in Greek) has fascinated humans from the earliest times.

Sadly, misperceptions about rhino horn’s supposed healing properties, as well as the horn being a sought-after status symbol in certain cultures, have led to these amazing creatures being hunted and poached to near-extinction.

Read on for an overview of these incredible animals, how they’ve been depicted by humans over the ages, and for a closer look at each of the five remaining rhino species’ diets. Is each rhino diet different?

The earliest depictions of rhinos have been discovered on stone plaques and cave walls, dating back about 30 000 years.

Such drawings have been found both in Africa and in Europe, indicating not only the geographical location of these animals at the time, but also the significance they held to early humans.

In 1515, German painter and printmaker Albrecht Dürer created the first modern artist’s impression of a rhino – a woodcut of an Indian rhino that had arrived in Lisbon that same year.

Having never seen the animal himself, Dürer created a remarkably close (if somewhat fantastical) likeness of this rhino from only an oral description and a rough reference sketch. Bizarrely, he gave the rhino a second, smaller horn situated between its shoulder blades.

This Indian rhino met a sad fate when it died in a shipwreck in 1516, en route to Italy, where it was intended as a gift for Pope Leo X.

You can read more about early European perceptions of the African rhinoceros here.

NEARING EXTINCTION DUE TO HUMAN IGNORANCE

Today, just five species of these sensitive, intelligent beasts that have roamed the earth for approximately 40 million years remain. Of the black, white, Javan, Sumatran and Indian rhinoceros, only about 29 000 remain in the wild.

Thanks to an increase in conservation programs and methods, the numbers of the southern white rhino have increased sufficiently for them to be awarded near-threatened status.

However, the black, Sumatran and Javan rhino are all still currently listed as critically endangered, while the Indian rhino is listed as vulnerable on the IUCN Red List.

INTELLIGENT AND GENTLE, BUT EASILY STARTLED

Rhinos are intelligent, social and emotional animals. Mostly gentle and peaceful in their behaviour, they do startle easily, and are rather quick to charge at the source of their agitation.

The rhino’s social habits depend on which species it belongs to. Some rhino species, such as the black rhino, lead a solitary existence, while white rhino females and their calves are very social.

In their natural habitat, adult males are always solitary, unless they are in search of a mate for breeding.

Male rhinos are also extremely territorial, marking their territories with their dung as well as by spraying urine. They are known to fiercely guard their turf against other male rhinos who may try to encroach on their terrain.

Interestingly, rhinos are often found in the company of Oxpecker birds (also known as tick birds), with whom they have a mutually beneficial symbiotic relationship.

Apart from prying parasites from their hosts’ skins, these tick birds’ sharp cries also serve as a warning signal, alerting their hosts to possible threats.

PROTECTING THE RHINO SAFEGUARDS MANY OTHER SPECIES

Rhinos are considered an “umbrella species” – one whose conservation indirectly safeguards many other species.

The conservation and monitoring of umbrella species is crucial, as their protection means a better habitat for all the flora and fauna in their ecosystem.

As an example – rhinos in the wild share their large habitat with many other plant and animal species therefore, saving the rhino means (indirectly) also saving dung beetles, aardvarks, lions and a multitude of other creatures that share the rhino’s habitat.

THE RHINO’S DIET – AN OVERVIEW

Rhinos are herbivores who rely on a variety of plants for nourishment. In their natural habitat, these gigantic herbivores graze mostly on grass and the fruit and leaves of shrubs and trees. As grazers, as they eat continuously, rather than at specific times.

During the heat of day, rhinos like to sleep in shady spots or wade in the coolness of mud pools, with the mud acting as a natural sunscreen and insect repellent.

The specific diet a rhino consumes depends on the species it belongs to.

For example, white rhinos have evolved to have square lips, ideal for feeding on long, soft grasses. Black rhinos have a pointy upper lip that makes it easy for them to tear leaves, fruit and branches from trees, and also pick them up from the ground.

The time of year is another important factor in a rhino’s diet. During the rainy season, when greenery is abundant, rhinos might eat more than they would during the dry season.

To stay hydrated, rhinos will drink water when- and wherever they may find it. But they can also survive without water for days at a time, getting moisture from the grasses they eat.

Read on for more information about the five surviving species of rhino and their respective diets.

THE WHITE RHINO AND ITS DIET

Native to the tropical and subtropical grasslands, savannas and shrublands of southern and central Africa, after the elephant, the two-horned southern white rhino is the biggest land-living animal in the world. It can grow up to 1.8m tall, weighing up to an astounding 2 500kg.

With its square lips, the white rhino subsists on a diet of mostly grasses and some leaves. During times of drought, the white rhino has also been known to dig into the ground with its horn in search of juicy roots.

White rhinos often walk with their heads down, near the ground. That’s because they are continually grazing on grasses.

THE BLACK RHINO AND ITS DIET

The black rhino lives in the grasslands and tropical bushlands of Africa. It has evolved to have a prehensile (pointy) upper lip, ideal for grasping and holding tree branches and leaves.

About 40 percent of the two-horned black rhino’s diet consists of grass. The rest is made up of leaves, twigs and branches. Black rhinos also sometimes pick up food that has fallen to the ground.

Like the white rhino, black rhinos have also been known to dig up tasty roots with their horn!

If a black rhino has been feeding on lots of grass and leaves, it can go for several days without water. However, if it’s been eating lots of twigs and branches, it will only be able to go one day without drinking any water.

Black rhinos walk with their heads up because a big portion of their food hangs from the branches of trees.

THE SUMATRAN RHINO AND ITS DIET

The Sumatran rhino can be found in the dense forests of the southeast Asian islands of Sumatra and Borneo. It is estimated that there are now fewer than 100 of these relatively small (500-960 kg), hairy, two-horned rhinos left on our planet.

One of the biggest challenges facing the Sumatran rhino is widespread loss of habitat and fragmentation, which makes it very hard for these solitary creatures to meet and mate in the wild. The threat of poaching for their horns is also ever-present.

The Sumatran rhino has been roaming our planet for longer than any other mammal alive today. This rhino’s diet consists of mostly leaves, shrubs, twigs and fruit.

Sumatran rhinos especially love feeding on figs, bamboos and wild mangoes which grow in the tropical forests that is their natural habitat.

THE JAVAN RHINO AND ITS DIET

Also known as the Sunda rhinoceros or Lesser One-horned Rhinoceros, the Javan rhino is the most threatened of the five remaining rhino species.

Only about 60 of these animals remain on earth, all living in Ujung Kulon National Park in Java, Indonesia.

Reaching up to 4 metres in length and 1.7 metres in height, the Javan rhino can weigh as much as 2.3 tons. It has a single horn of about 25 cm, and a pointy upper lip with which it grasps food and brings it to its mouth.

With the tropical rainforests of Asia as its natural habitat, the Javan rhino’s diet consists of a diverse array of plants, in particular twigs, shoots, young leaves and foliage and fruit that has fallen from trees.

Today the Javan rhino is a pure browser, but millennia ago it was possibly a mixed feeder, both browsing for plants and grazing on grasses.

THE INDIAN RHINO AND ITS DIET

The largest of the three Asian rhinos, the Indian rhino roams the forests and grasslands in the foothills of the Himalayas. Its habitat is savannas, tropical and subtropical grasslands, forests, shrubs and swamplands

Also known as the Greater One-horned Rhinoceros, this single-horned rhino is quite different from its African counterparts in appearance – its segmented coat resembles a coat of body armour, with flexible skin between the thicker hide plates allowing them to shift as the animal moves.

Although it has a prehensile lip, the Indian rhino is a grazer that follows established paths through its grassy habitat in order to feed, grasping tall grasses with its upper lip. It also feeds on leaves, fruits and occasionally farm crops.

The Indian rhino forages in the morning and late afternoon, when temperatures are lower. In the heat of day, they sometimes wallow or submerge themselves in water to cool down.

MAKE A DIFFERENCE – HELP FEED A ROCKWOOD RHINO FOR A WEEK

Feeding our crash of over 300 southern white rhinos here at Rockwood is incredibly costly.

Due to a debilitating drought, we’ve had no choice but to supplement our rhinos’ diets with expensive feed, to ensure they get all the nutrients they require.

With an adult rhino weighing in excess of 2 tons and eating over 840 pounds of grass a week, our feed bills are astronomical. We truck in tons of feed for our rhinos on a weekly basis, but costs are mounting, and we need all the help we can get.